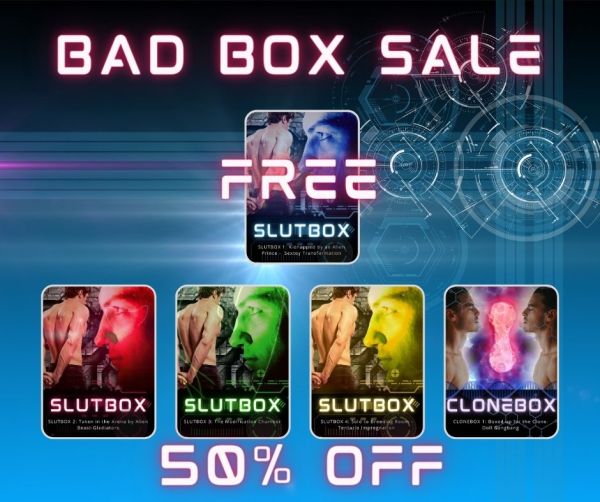 Billy was having a terrible day. He was dumped by his boyfriend, drunk and trying to get home, when his day got a whole lot worse and his journey home got a whole lot longer. Kidnapped from Earth, he is at the mercy of a disdainful alien prince and his lustful crew. This is a dark story series that contains non-consensual sex scenes.

On Northolus-key space station, Rinn does what he has to do to survive. Selling his body is what he knows, and his best client is the wealthy and powerful Dr Ezrek. Little does Rinn know that Dr Ezrek chose him not just for his tight ass and willing mouth, but also for the compatibility of his genetics with his newest invention – the clone-doll machine. Contains dubcon

Well, my state is back in lock-down and I am stress-writing again. So, welcome to Clonebox! Same universe as Slutbox, but not (quite) as dark. Seeing as I love you all, you can get both Slutbox1 and Clonebox1 for free until Dec 18 (coupon codes below). Tell me which one you like best in the comments!

The cradle was surprisingly comfortable, almost the exact size of Rinn’s body, with dips and curves molded to fit him. It was as though it had been made for him. Rinn settled onto his back, looking up at the looming machine above him. There were grips for his hands, and Rinn clutched at them, trying to steady himself. Surely Dr Ezrek was just trying to scare him? This must be some innocuous medical equipment that he was working on. The doctor was just playing out a fantasy. Surely.

Continuing the series of popular highlights from my kindle readers – another of Vell’s POV chapters from Prince for Sale. What I am getting from this is that you all like Vell’s POV!

Vell spat on the ground, smiling through bloody teeth. “I am Warprize-Thrall Vell. David Thomen of Earth is my master. He has not abandoned me.”
Outside the gates, David smiled grimly. “No, he hasn’t,” he said to the air around him, “No he hasn’t. Just hang on a little longer, baby. I’m coming.”

I love it when Vell says that line, when he claims his identity as David’s slave not because he is forced to, not with any reluctance or shame, but with conviction, with knowledge that it is true. David is his master, and that bond goes both ways, David has responsibilities to him, and Vell knows that he will fulfill them.

Remember back at the trading hall, when David had to chain Vell to the post and leave him there?

Concerned, David stepped closer. “Vell, I’m not going to sell you.”
Vell choked on a laugh, eyes wide, breath coming fast, “My own father sold me,” he said. “And my mother let it happen. And I am chained to a display post in the trading hall. You can make me no promises, Master.”
David leaned in, placing a soft kiss on Vell’s jaw, slipping the key to the cuffs into the pocket of Vell’s tunic as he did so. “Trust me,” he said. “Trust me. I won’t let you down.”

Yeah, that bit. David told Vell to trust him, and when it counted, when Vell is kidnapped and caged and tortured in the heart of the impenetrable forge, Vell does trust that David is coming for him. 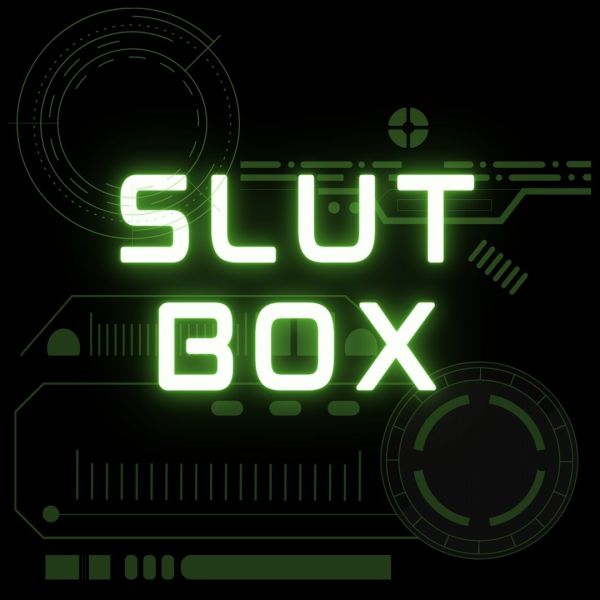 I am having a lot of fun with this irredeemable smut! I hope you are enjoying it too. Slutbox 3: The Modification Chamber is up on Smashwords now.

The receptionist used a foot pedal to pump the thing up inch by inch, breaching his well-used hole and pushing it home without pause. Billy was somewhat healed from his rough night, but he was still tender and far from ready to take another intrusion of that size. That didn’t matter at all, of course. There was nothing he could do but take deep breaths and try to force his muscles not to tense and clench as he was impaled.

Not sure? Get Slutbox 1 for free until Nov 17 using coupon code VF85R.

I recently realized that the kindle versions of my books shows the most popular passages that readers have highlighted. As an author, it’s wonderful to see what lines really resonated, so I am going to go through the popular highlights and share some secrets and thoughts about each of them.

Up first, the most popular highlight of book one – Prince for Sale, this extract from Vell’s point of view chapter “A Glimmer of Hope in the Dark.”

What Hreidmar had had from him through cruelty, David Thomen was likely to get through kindness. His compliance, his obedience, his service, the use of his body. Vell found himself willing to give those things to his master, should he want them. Even though it was merely the novelty of gentle treatment that was making him think such things, still he thought them. He should hold back, he should not trust the man, but it was hard to resist. The gifts he gave him, to eat with him from the same table, to speak to him as an equal, to enjoy his conversation, to make him a drink with his own hands. They were small things, yes, but each one of them reminded Vell that he was a person; he was a person, not just a thing to be used. And Vell was hungry for that. He needed it.

I loved writing this whole chapter. It’s the second of Vell’s POV chapters, and in contrast to the first of his POV chapters “A Bloody Spear, A Promise of Rescue” where he is thinking only about tactical survival – how to get food, how to avoid punishment, how to please David – in this one he is starting to think more strategically. He is trying to understand why David is treating him kindly, trying to plan ahead with what truths to reveal and what to try and keep hidden, and trying to understand and control his own emotional reactions. He knows how dangerous it is for him to let his guard down and trust his master, but at the same time, he is so desperate for that connection that it’s overwhelming his defenses and it is almost impossible to resist.

This chapter is a turning point chapter for Vell, alone with his thoughts while David is sleeping beside him. He is aware that David is not like his previous owner, and still not like anyone he knew on Otharn either. He certainly does not love him at this point, it is far too early for that, but despite his best efforts he cannot stamp out that little spark of hope – perhaps one day he may regain his freedom.

Do you have a favorite passage or chapter? Let me know in the comments and I will give you the lowdown.

Not sure? Get Slutbox 1 for free until Nov 17 using coupon code VF85R.

The fighters were big, Billy could tell that much. The shadowed figures were broad and tall, walking with the clank and grind of metal and the thud of weighty armor-clad footsteps. By the end of this spectacle, one of them would have won the right to fuck Billy in front of the assembled spectators, and he was sure they would make a show of it. He tried to prepare himself for the upcoming humiliation, but when the three fighters took their positions and the battle flag was dropped, the reality turned out to be far worse than Billy had imagined.

Billy was the prize, it was true, but he was not a prize to be awarded at the end of the bout. He was a prize to be taken and claimed in battle.

What’s Slutbox, I hear you ask?

Slutbox is what happens when your author is too stressed out to work on what she should be working on, and decides to take a diversion through shameless ‘kidnapped by aliens to be their unwilling pleasure slave’ territory.

Billy was having a terrible day – dumped by his boyfriend, drunk and trying to get home – when his day got a whole lot worse and his journey home got a whole lot longer. Kidnapped from Earth, he is at the mercy of a disdainful prince and his lustful crew.

The prince wants to toughen Billy up and turn him into his pleasure-toy. His unconventional methods include brainwashing, conditioning, humiliation, public use, severe bondage and dehumanization, and that’s all before the tentacles get involved!

Slutbox 1 is up on Smashwords for your reading pleasure, and until Nov 17 you can use coupon code VF85R to get it completely FREE.

Thorne had ripped the shirt off Tarrin’s back twice now. If he kept it up Tarrin would have no clothing left at all – it was better that Tarrin took it off himself.

Prince Lonn swore he’d never buy a slave. That was before he met Llias.

The Arcane Heart is about a week out from publishing – I literally cannot wait to share it with you, so chapter one is under the cut. Enjoy!